AGROMYC-MERCK GmbH is your global and highly competent partner for better soil by the use of Arbuscular mycorrhizal fungi.

AGROMYC-MERCK GmbH is a leading international Hamburg-based company in the field of Arbuscular mycorrhizal fungi. Since 2012, AgroMyc-Merck has been developing advanced soil additives trusted by users all over the world. Our international scientific partners specialised in arbuscular mycorrhizal fungi have decades of experience in scientific studies and field trials – People who put all their strength and ability into our products.

Customer proximity is the basis for a sustainable long-term cooperation. Therefore, we attach great importance to personal contact in order to offer you optimal solutions for your very special requirements and projects. Appointments are possible at any time.

We have deliberately opted for Germany as a production location, as we can use our scientific partners and supervisors to best meet and control quality standards. We are not focused on a short-term business, but the delivery of world class products to our customers, who value long-term. Business relationships focused on creating partnerships and synergies. Through our constant and dynamic product optimisation processes, which follow cyclic analyses under laboratory conditions, we always strive to offer our customers a Premium Class product.

Our work for good products is our heart’s desire.

AGROMYC®VITAL: A 100% ecological and organic Product

Our Arbuscular mycorrhizal fungi are a natural tonic for your plants: strong roots – more vital plants

How does it work? The fungi colonise the plants’s root tissues and penetrate some root cells. They supply to the plants water and mineral nutrients, whereas the plants supply organic molecules made by photosynthesis to the fungi. As a result, the plants become healthier, bigger, more resistent to harsh conditions and more productive. 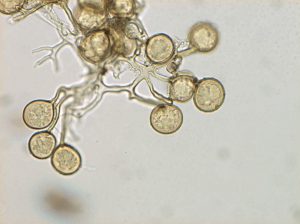 Mycorrhiza - Symbiosis between plant and fungus:

Mycorrhiza is lifeblood between fungi and plant roots, which makes life easier for both organisms. In biology, such a life-community is also called “mycorrhizal symbiosis”. Each partner benefits from the other. The fungus absorbs valuable vitamins and sugars from the root cells of the plant, which the fungus itself cannot produce because it lacks the necessary chlorophyll.

The plant in turn receives water and nutrients, such as nitrogen and phosphorus from the fungus braid, as the fungi can better break up nutrients and water in the soil. The subterranean fungus (mycelium) grows with the root of the plant and thus increases its root surface. The plant now has the ability to cover a more extensive area and penetrate deeper into the soil. It is better fed and is more resistant to weathering, pathogens, and pests due to its good nutritional status.

Even unfavourable environmental conditions such as high salt concentrations and longer-lasting dryness in the soil are better tolerated by the plant with the help of the fungus. A test with strawberry plants with a mycorrhized expanded clay (AGROMYC® VITAL) and with sterile swelling (see picture beside) shows that the strawberry plant seeded with mycorrhiza has larger roots and is considerably stronger.. 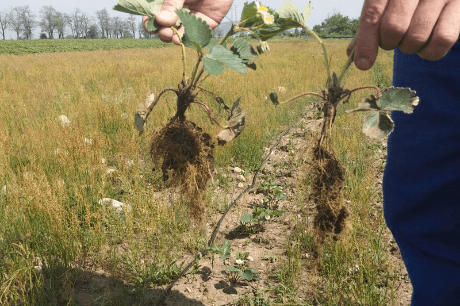